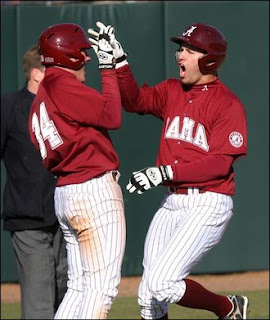 TUSCALOOSA, AL| In a game that was moved up to 2 pm to avoid freezing weather, it almost lasted into the evening. The Troy Trojans topped Alabama 7-5 in 12 innings yesterday as the Tide squandered a 4-1 lead in the 8th inning.

Alabama was led by freshman Jake Smith's 3 hit, 3 RBI performance and a decent start by Miers Quigley who gave up a run on four hits, and four walks in 5 innings of work. The bullpen could not hold the lead for the Tide, however, as Troy scored 3 in the eighth inning to tie the game and then the Tide bats went as cold as the temperature in Tuscaloosa.

Troy scored three runs in the top of the 12th inning and the Tide could only muster one run in the bottom half to end the game. Troy improved to 2-2 on the year and Alabama fell to 3-1.

Alabama stays at home this weekend with a three game set against Canisius. Friday nights game scheduled for 6:30 pm has been moved to 3 pm to avoid the freezing weather.
Posted by Nick Johnson at 9:43 AM