An A-Day For the Record Books 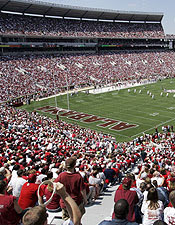 TUSCALOOSA, AL| Saying that Alabama fans are passionate about their football team is like saying Phillip Fulmer likes to super size his value meal...everybody knows it. That said, what happened at Bryant-Denny Stadium on Saturday had never been done before anywhere in the world.

Over 92,138 Crimson fans piled into the stadium to watch the Crimson Tide's spring football game and it could have been a much larger crowd. Alabama officials began turning away fans at the gate in the 2nd quarter of the game as all the seats were full and the University did not have the staff to accommodate such a crowd. The attendance shattered any other spring football game attendance record ever recorded across the nation.

According to Alabama, the next closest was Tennessee in their 1986 spring game when 73,000 Vol fans were in attendance. The record crowd was treated to a welcome sight as well, an Alabama team that was well disciplined, played smart, played hard, and most importantly played well.

The differences were noticeable to the all in attendance from the moment the team began to warm up. They looked organized, focused, and ready to perform. Senior WR D.J. Hall was named the game's MVP as he finished with 5 receptions for 87 yards, and 1 touchdown. Starting QB John Parker Wilson had a productive day as well as he finished 18-36, with 242 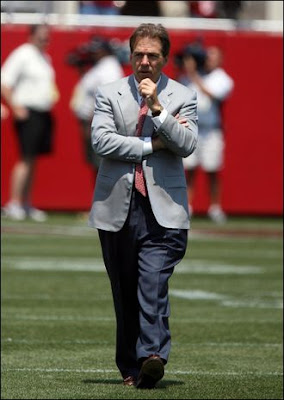 Backup QB Greg McElroy turned a few heads as well as he finished 14-33, for 139 yards and a touchdown. While the team played well, the crowd was the real story and it did not go unappreciated by the players and their new coach.

"It shows the passion that people have for the University of Alabama, and it certainly makes me feel good about being here as head coach. What we did today sends a message that there's a lot of support and enthusiasm for what's happening here right now. I certainly appreciate it. It makes me and my family feel good about being here. God knows we went through a little bit to get here, but we're happy to be here." Saban said after the game.

QB John Parker Wilson agreed. "It was awesome, we were standing around there like, Man, there's a lot of people here. We didn't expect that many people. To see that kind of support just makes us feel good." Wilson stated.

There is no doubt that Saturday was a historic and all around great day for the Alabama football program. The only thing Tide fans can hope for now is that the good times continue to roll into the 2007 season.
Posted by Nick Johnson at 8:31 PM