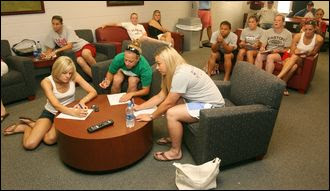 Most teams would be happy to host a NCAA Tournament Regional, but not when you get the 11 seed when you went into last week ranked # 1 in the country. The Alabama softball team was dealt a tough hand yesterday as the NCAA Softball Championship bracket was announced.

“Alabama could easily have been ranked higher," former UCLA and U.S. Olympic catcher Stacey Nuveman, a softball commentator for ESPN, said during the selection telecast. “The first thing I thought about was the SEC conference, and it really seems like they got raked over the coals."

Tide Head Coach Patrick Murphy agreed. “I think Stacey Nuveman said it best," he said. “You look at RPIs, you look at number of wins, the strength of the conference this year, I don’t think anybody saw this coming."

Alabama was not the only team in the SEC with a right to be upset. The Southeastern Conference had three teams rated in the top six at the end of the season, but only top-ranked Tennessee got a good enough seed to host through the super regional round if it advances, and the Lady Vols were seeded fifth despite being ranked No. 1 for much of the season. No. 6 LSU got the 10th seed and was shipped to a regional at Stanford, after they just won the SEC Tournament.

Whinning aside, Alabama can still play its way to Oklahoma City and show the NCAA they made a mistake in its selections by first winning its regional. Alabama, the top seed in the Tuscaloosa Regional, will host Tennessee Tech (48-17) at 6 p.m. in Friday’s first round in the double-elimination event, which runs through Sunday. California (33-30) and Florida State (44-23) will play in Friday’s other first-round game at 3:30 at the Alabama Softball Complex.
Posted by Nick Johnson at 9:48 AM