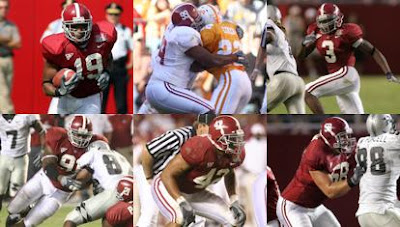 After three Crimson Tide players were selected in the draft on Sunday, Tim Castille, Jeremy Clark, Jefferey Dukes, Chris Harris, Juwan Simpson and Kyle Tatum all joined the ranks of former Alabama players in the NFL.

Castille, a fullback from Birmingham, signed a contract with the Arizona Cardinals. He played in all 13 games in 2006 and led the team with six rushing touchdowns. He finished the year with 129 yards on 46 carries to go along with 15 receptions for 91 yards. In his career he recorded 21 rushing touchdowns and 533 yards on 161 rushing attempts. He caught 60 career passes for 380 yards.

“It has always been a dream of mine to play at the next level,” said Castille. “I am going to try to make the most of it and do what I need to do to make the team.”

“I am thankful for the opportunity to work out with the Philadelphia Eagles,” said Clark. “I am going to make the most out of the opportunity and am not going to waste it because a lot of people never get this chance.”

Dukes, a safety from Oxford, Miss., signed a contract with the St. Louis Rams. He tied for the team lead with 86 tackles in a breakout 2006 season. He started all 13 games and recorded three interceptions with two pass breakups. He had 109 career tackles with four interceptions and two forced fumbles.

Harris, a defensive lineman from Tuscaloosa, signed a contract with the Kansas City Chiefs. He played in 12 games last season for Alabama with 20 tackles and a forced fumble. He had 46 career tackles with three sacks, one interception and one forced fumble.

Simpson, an outside linebacker from Decatur, signed a contract with the Green Bay Packers. He tied for the team lead with 86 tackles last year to go along with one interception and two forced fumbles. For his career he tallied 243 tackles with 16.5 tackles for a loss, four sacks, three interceptions, three forced fumbles and three fumble recoveries.

Tatum, an offensive tackle from Prattville, joined fellow teammate Le'Ron McClain when he signed a contract with the Baltimore Ravens. McClain was drafted in the fourth round on Sunday by the Ravens. Tatum played a total of 256 snaps in 12 games last season. He had 16 knockdown blocks for the Crimson Tide.

The six signees on Monday up the total of Alabama players in the NFL to 32. Nine players from last year’s squad will try to make their respective NFL teams as three players were drafted and six have signed NFL contracts.