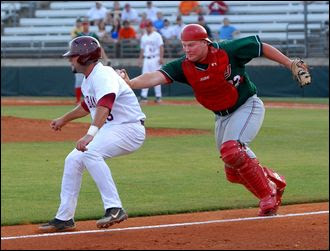 The bats continued to sizzle for the Alabama baseball team as they rolled to a blowout win over the Mississippi Valley State Delta Devils, 12-1, on Tuesday night. The Crimson Tide has scored 45 runs in its last four games, 23 of those coming in its last two victories, as the Tide has won 4 out of its last 6 games.

Bama pounded out 18 hits in the game with ten different Alabama players had hits in the game, including three different players who hit home runs. One of those, sophomore walk-on catcher Brian Clark, recorded the first hit of his UA career with a solo home run in the bottom of the eighth inning.

Patrick Kelly helped out the pitching staff by tossing six scoreless innings where he only allowed two hits and collected 8 strikeouts. Brian Griggs came on to finish off the Delta Devils giving up one run on one hit over the last three innings. The win allowed Jim Wells to save the rest of his pitching staff for this weekend's three game series at Florida.
Posted by Nick Johnson at 2:19 PM