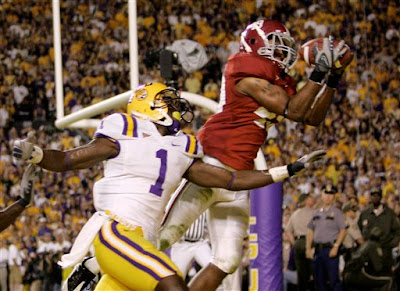 Alabama (10-0, 6-0) did about everything possible to lose the game in the first half. On the opening possession Alabama drove the ball right down the field only to turn the ball over as WR Earl Alexander stretched the ball towards the goal line only to have LSU safety Chad Jones knock it out of his hands.

Alabama would turn the ball over two more times in the first half and luckily with a stout defense and terrible QB play by LSU's Jarrett Lee, the Crimson Tide headed to halftime tied at 14-14. The man responsible for ruining most of Lee's day is Alabama safety Rashad Johnson. Johnson had an All-American day with 3, that is not a misprint, he had 3 interceptions. One of those was in overtime that helped seal the victory for Alabama. Another one of them he returned for a TD to make the game 14-14 and take Alabama into halftime still feeling good about its chances.

I felt good about this game all week because I thought we simply had better players. As the day went on and the game started I began to realize that LSU had everything in its favor. Playing at home (advantage), College GameDay in town (advantage), playing the # 1 team in America (motivation), and playing their ex-coach who they hate (motivation). Alabama was also just a better matchup for LSU then Georgia or Florida were. Those two teams run a spread type offense and LSU is just not built for that. They are a tough, physical strong team that wants to run you over. Sound familiar? That is us as well. 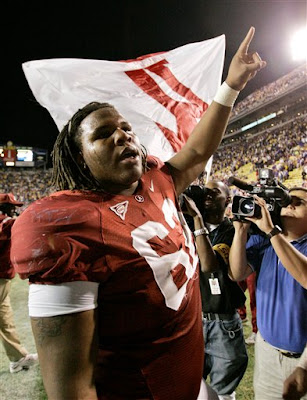 Given everything that pointed in LSU's way, including the three turnovers, Alabama still won the game. We went to Baton Rogue and beat the defending national champions with everything in the world going against us and that says something about this team. We played poorly and still figured out a way to win in one of college football's toughest road enviornments.

Attention now turns to our last two remaining home games against struggling SEC West rivals, Mississippi State and Auburn. State has beat us two years in a row and Auburn six. That will be motivation for this team but they have a larger goal...a shot at the national title. With the SEC West title already wrapped up and a date set with the SEC East champ Florida Gators, our brutal schedule continues. I am not sure if this team can win all three of those games, but I love our chances as this team just keeps finding a way to win.
Posted by Nick Johnson at 8:30 AM