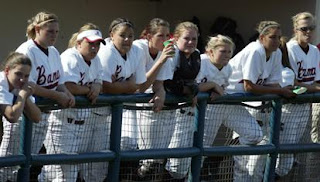 
TUSCALOOSA, AL| Coming off another 50 plus win season, a 25-4 SEC record, an SEC Championship, and College World Series appearance the Alabama softball team looks to repeat as SEC champs and return to the World Series in Oklahoma City with a mixture of returning starters and new faces in 2007.

The biggest challenges facing the Tide this year are replacing the 3-4-5 hitters in the lineup and its ace pitcher, Stephanie Van Brackle. The good news for the Tide is that they return 15 players this year, 5 of them seniors, making it one of the largest returning classes Alabama has ever had.

Coach Murphy told rolltide.com the experience proved vital in fall practice. "We didn't have to focus on the basics because almost everyone had been through it before. We were in the first week of practice and it felt like the third week because the practices were going so fast and everybody knew the routine."

Using what Murphy calls one of the best offensive lineups Alabama has ever had, combined with a very good pitching staff the Tide looks to be one of the top teams in the nation in '07.

The Tide is led by sophomore center fielder, Brittany Rogers, who is a NFCA and Easton All-American. The 2006 SEC Freshman of the Year led the Tide last season with a .427 batting average, had 88 hits, 60 runs scored, a .476 on base percentage and added 38 stolen bases.

and Jessica Smith, all who played last season. Also returning in the outfield are Mandy Buford, Katie Johnson, Mallory Benak, Jordan Praytor was second on the time with a .415 batting average, 57 runs scored, 78 hits, 9 home runs, and 27 stolen bases.

Speed is a commodity the Tide will rely on this season as they return 4 players who stole 10 or more bases last season. Alabama returns two starting infielders including Dani Woods, a 2006 all SEC pick at first base. She had 7 home runs and over 50 RBI's last season. Another 2006 SEC selection, Kelley Montalvo, also returns after hitting .285, with 3 home runs and 20 RBI's.

Michelle Menningman and Kellie Eubanks are competing for the shortstop position with Menningman starting all four games in the fall and posting a .400 average. Eubanks who played in 32 games last year is also a solid option.

Lauren Parker, Charlotte Morgan, and Alex Bewitt are all newcomers for the Tide who look to play important roles this season in the infield.

If the fall is any indication for the Tide, they will pick up right where it left off last season on the mound. The starting rotation of Chrissy Owens, Blair Potter, and Allison Moore combined to pitch 23 innings, allowing only 9 hits, had 30 strikeouts and only allowed two walks. Teams hit a combined .117 against the Tide. Charlotte Morgan will also see some time on the mound when she is not playing in the infield.

Sophomore Ashley Holcombe, a 2nd team all SEC catcher last season, returns after hitting .242 last season with 10 doubles, 3 home runs, and 18 RBI's. She will be backed up by Kellie Deska.

Alabama opens their season this Friday night against Oklahoma State in the Century-Tel Softball Classic in San Marcos, Texas.
Posted by Nick Johnson at 10:12 AM