# 25 Alabama Heads To Knoxville to Take on the Vols


The Alabama Crimson Tide(19-7,6-6) travel north to Knoxville, TN Wednesday night, trying to secure their spot in the NCAA Tournament with a win over Bruce Pearl and his Volunteers in Thompson-Boling Arena. The bad news for Alabama fans is that nobody has accomplished that feat all season. Tennessee (18-9, 6-6) is 14-0 at home this season and has won four out of its last five games. Their last two home games the Vols defeated two ranked teams, Vanderbilt and Kentucky. The good news is that Alabama has won 7 in a row over the Volunteers.

While unranked, the Volunteers have an RPI of 15 in most indexes and a road win there for Alabama would almost secure a NCAA Tournament berth, with Ole Miss and Auburn at home next on the schedule. While a win would be nice, Alabama is going to need to play one of its best games to get it done. The Tide only has one SEC road victory this year, at LSU, and usually struggles against teams with great 3 point shooters. Tennessee has one of the best in Chris Lofton.

Lofton needs four 3 pointers to become 4th all time on the SEC 3-pointers made list. He leads the SEC in scoring at 20.9 points a game, and also leads in 3-pointers made in the SEC with 3.39 a game. JaJuan Smith is second on the team in scoring chipping in 15.0 points per game. They are the highest scoring duo in the Southeastern Conference.

Alabama is led by sophomore Richard Hendrix's 15 points and 9 rebounds a game. Jermareo Davidson (14.5) and Alonzo Gee (13.0) also average in double figures for Alabama. For the Tide to win this game they must feed the ball inside to its bigs all night long. The weakness for this Tennessee team is defense and particularly with its big men. The Volunteers start 3 guards and 2 forwards and play an up and down fast pace style of basketball. While it frustrates teams while the Vols have the ball, their lack of size on the inside is something that can be exploited by Alabama, whose strength is its two great big men.

Tennessee's 14-0 home record can be looked at two ways. Either they are just not going to be beat at home and the Tide has no shot or they are due for a home loss. If the Tide can play stellar defense, particularly on the perimeter, and feed the ball inside offensively, they can win this game. That might call for more playing time for freshman Justin Tubbs whose main job would be to blanket Lofton 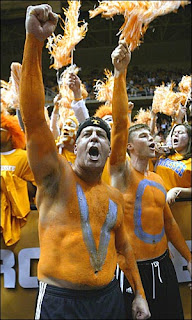 all night long. If the Tide can control Lofton, I think they win this game. If they can't, its going to be a long night. I am going with option one, and a close to healthy Ron Steele, in this one to give the Vols their first home loss.

On a side note, my respect for Tennessee coach Bruce Pearl went through the roof, when he showed up shirtless (pictured right) to a Lady Vols games earlier this season. Nice job coach.