Tide Football Gets First Commit for 2008 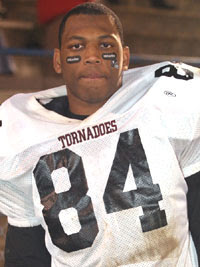 TUSCALOOSA, AL| There is nothing wrong with getting off to an early start. Head football coach Nick Saban had just about a month to put his 2007 recruiting class together and finished with a team raking of 10th in the country by Rivals. com. Imagine what he can do with a full year.

Saban got his first commitment on Friday as Pickens County, AL TE/DE Michael Williams committed to play football for Alabama. The Pickens Co. star is suppose to be one of the best players in the south next year. Williams was quoted as saying "Alabama offered me either last Thursday or Friday. I was real excited about the offer. I grew up favoring Alabama. I has been a dream of mine ever since I was young to play at Alabama."

Williams is a massive 6'6, 240 lbs. and is being recruited to play both offense and defense. He was named First Team All State as a tight end and honorable mention as a defensive end as a junior. He totaled 68 tackles and 11 sacks during his junior season.

Alabama now has three players on its 2008 commit list as Williams joins William Vlachos and Patrick Crump, who both accepted gray shirt offers from the Tide this year.
Posted by Nick Johnson at 10:11 AM