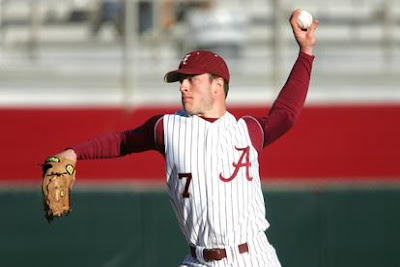 Coming off two straight losses, the 13th ranked Alabama baseball team responded with a great performance Friday night beating # 18 Nebraska 8-0 at "The Joe". It was the first time a Nebraska team has been shut out since 2003.

Alabama (13-4) pounded out 11 hits on the evening and was led offensively by Emeel Salem and Ryan Rhoden, who both went 2-4 and each hit home runs. Freshman Jake Smith also collected multiple hits, going 2-5 on the night.

The series continues tomorrow afternoon at 4pm CT as Kasey Kebedeaux will get the start for the Crimson Tide.
Posted by Nick Johnson at 9:51 PM