"The Joe" Gets a Much Needed Facelift 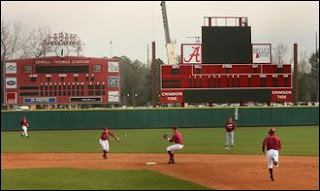 TUSCALOOSA, AL| Coming off an SEC championship, top 10 final ranking, and 2007 preseason # 24 rank the Alabama baseball team and their stadium are being rewarded for their efforts. Construction is near completion on a new scoreboard over the left field wall right above the 365-foot mark.

The new scoreboard is a much needed improvement over the older, outdated one that has serviced Sewell-Thomas Stadium for years. The 40 foot structure is highlighted by a "Jumbo-Tron" that will be able to show players pictures and information similar to the way big league stadiums do on a nightly basis. In a statement to the Tuscaloosa News athletics director Mal Moore stated "We're trying to enhance the fan experience while continuing to maintain a top baseball facility."

After last season, LSU fired embattled coach Smoke Laval and came looking at Louisiana native and all time winning Alabama coach Jim Wells. Coach Wells spoke with LSU AD and baseball legend Skip Bertman, the two are close friends, about the opening but decided to remain at the Capstone after promises of stadium renovations among other things by Alabama athletics director Mal Moore. Obviously, Moore is holding up his end of the deal providing the Tide with a facility that will keep them on par with most of the other SEC ballparks.

Hopefully, the 2007 season will be as easy on the eyes as the Tide's new addition just over the left center field wall.
Posted by Nick Johnson at 9:01 AM