Saban "On Another Level" when it comes to Recruiting 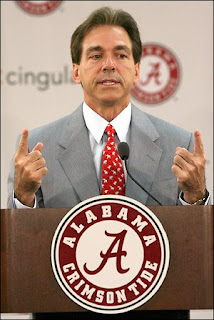 TUSCALOOSA, AL| New Alabama head football coach Nick Saban and his staff have wasted no time in getting into the rat race that is college football recruiting. Hired with just over a month until National Signing Day (early February) many thought Saban could not add much more talent to this year's class. Has he ever proved them wrong. Not only has Saban worked hard to keep the commitments from former coach Mike Shula's class, but he has also hit the road looking to bring in even more future stars.

Saban has gone after some of the best players out there including 5 star players Joe McKnight (LA) and Noel Devine (FL) and 4 star Sidell Corley and Brandon Gibson, both of Mobile and current LSU soft commitment Luther Davis (LA). He and his staff have also received a commitment from San Antonio, TX quarterback Nick Fanuzzi.

The job this staff has done with trying to keep Shula's recruits and also get some of the best players in America to visit Tuscaloosa is nothing short of incredible. The future of our football program is bright as Saban looks to bring in talent that has not been seen in Bryant Denny in quite a while.
Posted by Nick Johnson at 12:48 PM