#12 Tide Basketball Looks to Get Back on Track 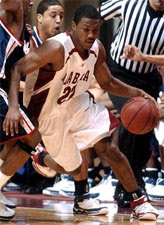 TUSCALOOSA, AL| Currently 2-3 in the SEC, and playing terrible on the road, the Crimson Tide basketball team looks to get back to its winning ways this Saturday versus Arkansas at Coleman Coliseum. The Hogs stomped the Tide in Fayetteville earlier this season, but the Tide enters the game with a 17 game home winning streak against an Arkansas team that like most teams in the SEC West, struggles on the road.

The Tide have been a mystery this season as they have one of the most talented teams in the SEC but seem to give up big leads early and get blown out when the game is not being played in Tuscaloosa. The Tide's lone road win this season was at rebuilding N.C. State.

If the Tide wants to make some noise, or even make the NCAA tournament, they need to fix that problem in a hurry. Hopefully, Mark Gottfried will have the troops ready to go Saturday in a crucial SEC West showdown.
Posted by Nick Johnson at 11:19 AM