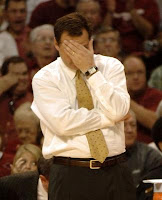 As I watched the 2007 Alabama Basketball team self-destruct once again against the Arkansas Razorbacks on Saturday, I found myself wondering if several Tide players even were excited to be in the position their in. Many seemed like they would have rather been catching up on the episode of Martha Stewart Living they missed than playing for the Crimson and White.

I also saw a coach who seemed to be very impressed with how poorly we were playing. A coach who did not raise his voice or get in any one's face. He simply clapped. All of this while we proceeded to trail by double digits in the first five minutes of the opening half for the fourth consecutive game.

My heart goes out to Ron Steele. Talk about a warrior. But a warrior who is fighting without any of his weapons. His lack of ability to play like the first team All-America point guard does definitely hurt this team, but is not the problem.

When you fail to be ready to play for four consecutive games, it is not the players' fault, it falls on the head coach.

Gottfried seems to lack the fire most successful coaches have, yet he has been successful. His lack of the ability to motivate is a glaring fault this year. On several occasions this year two or three starters were benched in the early moments of the game, due to their lack of focus and intensity.

Gottfried also seems to share a characteristic with previous Crimson Tide Head Football Coach Mike Shula; not being able to recognize the talent he has. Many Tide fans have called for increased playing time for true freshman guard, Justin Tubbs, for most of the year. Tubbs came in yesterday and seemed to lock down sharp shooter Patrick Beverly, and provide a spark on the offensive end with crisp passes.

Was he not ready to contribute up until this point? Doubt it. This book reads, oh to similar, to one Bama fans read on during this past football season on Nikita Stover.

Could this team have made a Final Four run with a healthy Ron Steele? Maybe. Can such a talented team not even make the field of 65? Only time will tell.