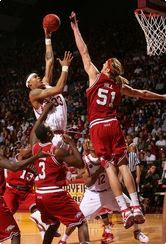 TUSCALOOSA, AL| Maybe they were trying to change things up. Maybe sporting the throwback uniforms was what the Alabama men's basketball team needed to snap out of their slump and beat Arkansas at home yesterday. Maybe with the new uniforms the Tide would come out and play inspired basketball from the tip. Maybe the 17 game home winning streak would be enough to beat an Arkansas team that has been terrible on the road. Wrong, wrong wrong, wrong. It was the same story in a different arena for Mark Gottfried's crew.

They started slow and got down by double digits before the half way mark of the first half. It was a very familiar sight for Crimson Tide fans, Alabama (15-5, 2-4) playing like they were forced to play a game instead of coming out trying to make a statement in a critical game in the mediocre SEC West. The only difference in the scenario was unlike last week against Georgia, Coleman Coliseum and the home crowd were not enough for the Tide to overcome their horrible start. Not enough to overcome shooting 18% from the floor in the first half. Not enough to overcome letting Arkansas center Stephen Hill, who always kills Alabama, grab 12 first half rebounds and completely control the paint.

It is not difficult to see why the Tide lost this game. When the starting back court of Ronald Steele, Alonzo Gee, and Mykal Riley scores a combined total of 4 points and you do not play well on the defensive end, you are going to lose games no matter if they are played in Coleman Coliseum or the Coliseum in Rome.

To their credit the Tide did try to make a miracle comeback led by sophomore Richard Hendrix's 28 points and the defensive intensity that reserves Justin Tubbs, Brandon Hollinger, and Demetrius Jemison provided. It was a refreshing sight to see these little used youngsters come off the bench and play like they wanted to be there. Hopefully, there minutes will increase. Hopefully, the starting five, other than Hendrix, will play hard night in and night out. Hopefully, the Tide can play like the team that many around the University thought would be the best team Alabama has had in years.

We can hope all we want but until some things change on this team the talk around Tuscaloosa will change from "Do you think they can make the final four?" to "Do you think we will make the NCAA tournament."
Posted by Nick Johnson at 9:01 AM