"Under the radar" players commit to Tide after visit to Tuscaloosa

While Nick Saban and his staff have been loading up on highly touted recruits, they have not forgot the possible "sleepers" in this class either.

this weekend in Tuscaloosa. Both have seen their recruitment heat up lately and decided on the Tide after touring the campus and receiving scholarship offers.

Hanks, who is 6 ft and known for his blazing speed and playing making ability is also a top baseball prospect but stated his "dream" is to play college football. Hanks was scheduled to visit Georgia this upcoming weekend for an official visit, but has cancelled that trip and says he is fully committed to Alabama.

Underwood, who also holds offers from UCLA and Southern Miss and has received attention from Clemson, Memphis, and Georgia Tech, is a 6'4 TE from Vestavia Hills High School. A lifelong Alabama fan, Underwood has also seen his stock rise as of late and wasted no time accepting his Tide offer. He also plans to enroll in the fall. 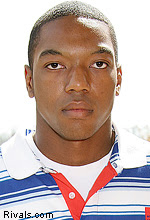 More recruiting news as it happens on Inside the Tide.
Posted by Nick Johnson at 3:13 PM