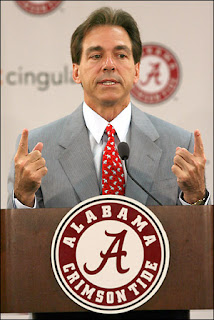 Farmer, who just received a scholarship offer this week, picked the Tide over multiple other offers including Tennessee, Nebraska, Oklahoma State, Houston, Kansas, and UTEP.

The 6'1 190 lbs. head hunter is also extremely fast as evident by his 40 yard dash time, which is clocked at 4.4. Former Texas star quarterback and current Tide assistant coach, Major Applewhite, who recruits Texas for Alabama, was one of the biggest factors in landing Farmer.

The 6'5 220 pound Williams, a lifelong Alabama fan, had not received an offer from the Tide until the last few days as coach Nick Saban is trying to figure out how many scholarships he has available for this year's class. When Williams got the offer from the Tide he committed right away.

Both are expected to sign their letters of intent on National Signing Day this coming Wednesday, February 7.
Posted by Nick Johnson at 2:01 PM