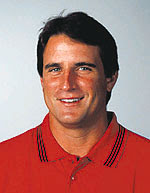 Mike Shula, who was fired this past fall as head coach of the Alabama Crimson Tide football program, has accepted a position to become the quarterbacks coach for the Jacksonville Jaguars of the NFL.

Shula, son of legendary coach Don Shula, joins Coach Jack Del Rio's staff in Jacksonville and takes over a "quarterback controversy" situation in which 3 Jaguars quarterbacks started games last year. Byron Leftwich, who has battled injuries and inconsistency, began the year as starter but ended up being replaced by David Garrard. Third string QB Quinn Gray started the last game of the season for Jacksonville after they were eliminated from playoff contention.

Coach Jack Del Rio told jaguars.com he is pleased to have Shula on his staff. "He is a great fit for us. He has got experience at the position. He played quarterback, coached quarterbacks, been a coordinator, and has NFL experience. He has a great presence about him and understands the position."

Not only is this good news for Mike Shula and his family but also for the Crimson Tide from a financial standpoint. The Tide would have had to pay Shula about 4 million dollars over the remainder of his contract after they let him go following his 6-6 season. Now, Alabama just has to make up the difference of his current salary with the Jaguars with the one he was under with Alabama.
Posted by Nick Johnson at 12:51 PM