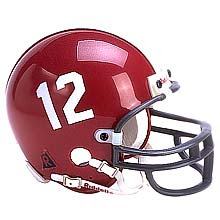 TUSCALOOSA, AL| Alabama's annual spring football game, A-day, has been set for April 21, 2007. The game marks the end of spring practice for the Tide and allows fans to watch an inter squad scrimmage in Bryant-Denny Stadium.

As the Tide usually draws large crowds for the game, this year there is talk of a full stadium as new coach Nick Saban takes part in his first A-Day. The Tide, who finished 6-7 in 2006, returns numerous starters on both sides of the ball and is looking to have a much better season under Coach Saban.


NCAA Probation Over for Tide Football

For the first time in 15 years the Alabama football program was operating without fear of NCAA sanctions on Wednesday night. Alabama has been on the NCAA's watch list since the 1992 national championship with probation and its repeat offender status. The last five years the Tide has endured better than most, the NCAA included, had expected and has came out probation with a solid program.

In the last five years the Tide has had two 10 win seasons and gone to three bowl games, as there was a 2 year bowl ban put on the Tide. The Tide has also seen a run of head coaches since the last violation five years ago. Then head coach Dennis Franchonie left for Texas A&M, Mike Price had some personal problems that lost him the job, Mike Shula was fired following this season, and now current coach Nick Saban will be the first to operate without having to look over his shoulder for an NCAA compliance agent.

Overall, the Tide football program has come out better than almost all would have thought and with the NCAA sanctions a thing of the past, things are looking up in the future.
Posted by Nick Johnson at 9:05 AM