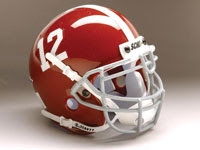 It will be interesting to see just how many changes occur during this years annual rendition of Spring Practice. Saban will definitely bring a new flavor of Kool-Aid with him.

Quarterback: John Parker Wilson now has a year under his belt as a starter in the SEC, and should be a Coach Nick Saban favorite. He will have to be mistake free and in control, or Saban will find someone who can be. Wilson proved to be one of the few consistent performers on offense last year, and you have to believe he will play even better in ,07.

Watch out for: Greg McElroy He racked up monster numbers in the high school football mecca of Texas, have to believe he will make some noise.

Running back: This position will be the most interesting to watch and will not likely be determined until Fall practice. Not knowing if the Tide will land any of the high profile backs in this recruiting season, I believe three backs are in the mix: Roy Upchurch, Glen Coffee and Terry Grant. Upchurch has always shown flashes of greatness on the practice field, but has fought injuries throughout and seen limited playing time. Coffee is returning from a knee injury and it will be interesting to see how he has recovered. Grant has blazing speed and is also returning from a shoulder injury. Grant should raise a lot of eye brows on the new coaching staff.

Watch out for: Demetrius Goode He was a highly regarded recruiting prize coming out of high school, and runs with great power and speed.

Wide Receiver: This will be the most experienced of the returning offensive positions. The cupboard is definitely full of talent. DJ Hall evolved in to a savvy, veteran receiver last year, and should be a force for secondaries in the SEC. Keith Brown has shown flashes of greatness, but also looked very "soft" at times. His toughness will be questioned and will have to improve. There will be no more "alligator arms" when you come across the middle, Keith. That brings my personal favorite of the receiving corps, Nikkita Stover. This kid is an amazing talent. He should have played much more last year, but this Spring will be his personal showcase. He will also raise eyebrows. Another player who is very solid is Will Oakley. He has great speed and should be a force in the slot as well as down field.

Offensive Line: This group should be much improved fundamentally under Saban. Contrary to popular belief; there is quite a bit of talent returning. {Andre Smith (RT), BJ Stabler(G), Antione Caldwell (C), (Taylor Britt (G)} This group should be very solid. The tight end will be experienced also with veteran starters Nick Walker and Travis McCall returning. Also, Charles Hokes pass catching ability and height will be very useful as a pass catching option.

Watch out for: The battle for starter at right tackle: Chris Capps did not have a very productive year last year and is on very thin ice. Both Alex Stadler and David Ross should provide very formidable competitipon.