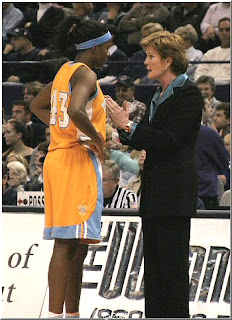 Rebuilding Alabama women trying to top "The Miracle on Ice"

TUSCALOOSA, AL| "All I Need is a Miracle" by Mike and the Mechanics is an appropriate song for the Alabama women's basketball team today as they host # 4 Tennessee. Stephany Smith's young Tide squad has started 0-6 in the SEC but the players think they are not as bad as their record states. "We know how close we've been. We know we're capable of contending with all the SEC teams. It gets frustrating sometimes" senior Navonda Moore told the Tuscaloosa News.

Today at 2pm in Coleman Coliseum, the Tide will have to chance to prove that statement is more than just words when they take on legend Pat Summitt and her Lady Vols (18-2, 5-0) who are playing their third game this week. The first two being a win over #15 Vandy and a close home loss to # 1 Duke, which will go down in history as the game where Tennessee men's coach Bruce Pearl painted his chest while rooting for the Lady Vols.

While I try to make it a point to never compliment anything about the Volunteers, I must say I respect Pearl's enthusiasm for the Lady Vols and Tennessee in general and find it h 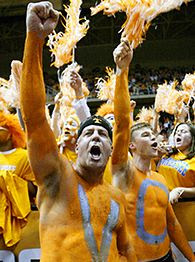 ard to believe that Mark Gottfried, Bobby Knight, Coach K or any other big time coach would pull a stunt like that. Bravo, Bruce, Bravo.

Back to this game. The Tide has not beat the Lady Vols since 1984, most of our players were not born yet, and Tennessee leads the all time series 38-2. The Lady Vols also won the Jan. 3 meeting in Knoxville 72-36. While this does seem like the season to break any streaks over Summitt's Lady Vols, the Tide could start to turn the season around by playing well and making this at least respectable.